Skip to the beginning of the images gallery
Details
More Information
Specs
Features
Reticle
Video
Whats in the box?
Warranty

The IOR Terminator 12-52x56 is completely unparalleled; its incredible optical engineering and new innovative features makes it the most advanced conventional riflescope available in the world. Equipped with Low Dispersion ED German Schott Glass the IOR Terminator 12-52x56 gives an image which can only be described as unbelievable - its brilliant mid tube parallax adjustment offers a crystal clear image as close as 21 feet @ 52 power.

IOR Terminator 12-52x56 Riflescope is a unique super breed of riflescope where uncompromising old world craftsmanship has met the newest and most up to date technology available and with this combination has created a powerhouse of the Optics world.

The IOR Terminator 12-52x56 Riflescope has a 40mm tube which gives the scope massive strength and 100 MOA of elevation for the ultimate in long-range shooting flexibility. The scope is equipped with oversize zero stop turrets with 25 MOA per revolution and the option of interchangeable BDC turret rings for .338 Lapua and .50 BMG.

The IOR Terminator 12-52x56 Riflescope is supplied with the new MP-8 Xtreme MOA - X1 Reticle which can be illuminated with the digital control which also has the ability to auto shut off to save battery power. The IOR 12-52x56 Riflescope is also supplied with an IOR sunshade. Brand New to the 2014 model of the Terminator, the zoom ring is click stop calibrated to be 1/2 mRAD at 14.4 mag, MOA at 26x & 1/2 MOA at 52x.

"I switched to the IOR Terminator after several scope failures on my match .50bmg during competition, Optics Warehouse supplied the scope after a long discussion with Shaun.

The terminator exceeds expectations, light gathering is superb, glass clarity is awesome edge to edge. Critically for me the turrets are repeatable and take the constant adjustment from bottom to the top of the full 100 MOA range with no issues at all.

At 1000yds the 52 power magnification allows me to see the bullet holes, although given the heat of the locations I normally shoot, I have to drop back to x26 usually to actually shoot, just to avoid the mirage. The floating centre aiming dot is perfect for my applications. 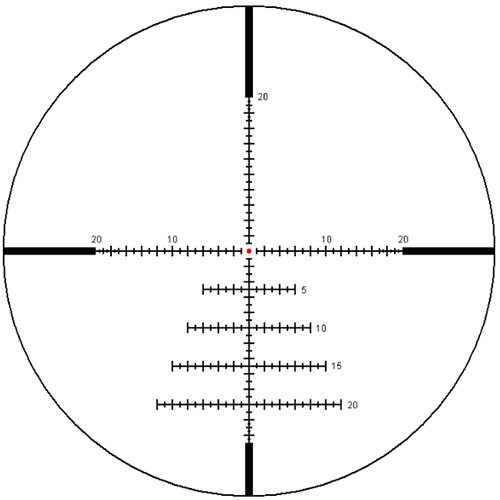 Looking to Mount this scope to a Ruger Precision or a Rifle with a Flat top mounting system then take a look at the Tier One 40mm Uni Mount: select the medium height, Long saddle - Due to the Terminator saddle being an odd shape.

Write Your Own Review